Siril is able to process planetary images (many small images) as well as deep sky images (a few large images with full pre-processing data). Registration is able to automatically align (translation only) planetary images, using DFT, as well as deep-sky images, using FWHM on a reference star, as long as the shift between images in not too large. The manual alignment capability makes it also well fitted for amateur astronomers having bad quality images that automatic tools fail to align properly.

Professional astronomers generally use 32-bit depth images, but Siril uses only 16-bit images internally (except temporary for stacking). Loading 32-bit images is supported but it will degrade them since they will be converted to 16-bit. It can still be useful if the intent is to produce public-friendly pictures.

And more generally, people who want to use free software on free operating systems to process images. Siril can even be used to extract previewed frames from many videos formats. For an overview, see the screenshots, some image processing results, or documentation pages. 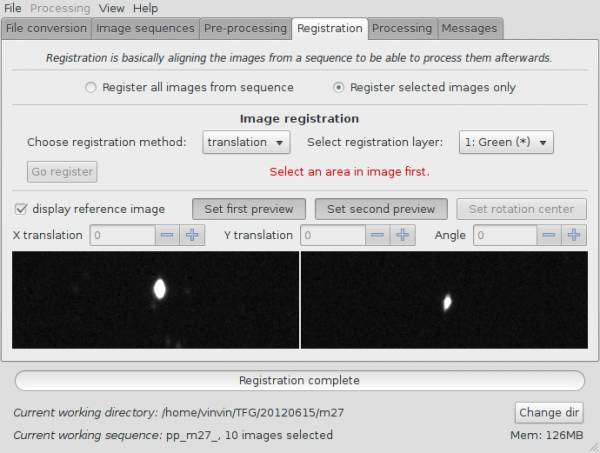 The software is still in alpha phase, meaning it's still being heavily developed and quite unstable, but most functionalities are working. Many improvements have been done over the previous unmaintained version, including better handling of conversions, image sequences and errors, improving the GUI, and lots of bug fixes. The command line has been reactivated in large proportions, see the list of currently available commands on the dedicated Commands page. New commands and features are also being developed, and new file formats being supported (all RAW, all BMP, all TIFF, JPEG, PNG, Iris' PIC, AVI and other films, SER). For more a more complete, see the 0.9 alpha page, the subversion log, or the list of features below.

The roadmap for Siril is in the TODO file, and the list of known bugs is maintained in the BUGS file. The changelog is available in the SVN log (not yet available online). Priority for next developments is adding support for wavelets in the GUI and LRGB. If you want to contribute, you are welcome!

For pre-processing, Siril applies master offset/bias, dark and flat images to the current sequence. These master images thus have to be processed before processing the actual image sequence. Siril currently does not support processing multiple sequences at the same time, so each layer of the final image must be processed independently before assembling them into an RGB image. A new tutorial will document this process soon.

A documentation page contains an illustrated complete processing tutorial, instructions on how to use particular features of Siril, along with a few videos to illustrate or describe these capabilities.